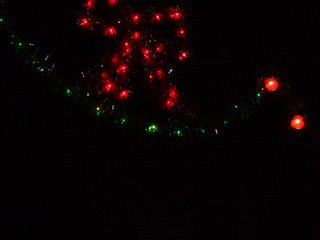 In the weeks leading up to Christmas, New York City evenings begin, and soon arrive at, their annual ritual of taking on an extra-added electric glow. The added hues and shades of light announce to residents and visitors alike, the holiday season has arrived. New York’s extravagant Christmas lights and decorations provide visual coaxing for what is meant to be a festive time of year in an American city that never sleeps, and loves to shop. Tourists, children and many residents, look at the lights in awe as Department store districts like those in Midtown transform into a Christmas wonderland, where shoppers scurry about like busy elves getting ready for a certain really big night.


From Rockefeller Center and the famous, tall, sculpted and not a spot missed lit tree, to the giant crystal snowflake at 57th and Fifth Avenue, the city is polished and ready for Santa, North Pole bound, almost to the point of perfection in its decoration. Even down in the fashion district new, modern lights, single color snowflakes and stars line the streets, one right after the other in almost accurate order presenting a city that at first glance, appears to have been enrolled in an exterior decorating class. Parts of Manhattan present a polished Christmas, a scene out of a modern “Miracle on 34th Street” where all is planned and occasionally one gets caught up in the brightness of it all. But, sometimes, one stumbles upon an electric display that doesn’t shine as bright as those in Midtown, instead its lights twinkle, and for some unknown reason, it brings back memories, touching on that nostalgic nerve that provides a key to the spirit of Christmas.

According to Mary Bellis at “About.com”, Inventor Edward Johnson was responsible for the first string of Christmas lights back in the late 1890’s. By 1900, Department stores had started using the lights for displays. Later, Albert Sadacca came up with “safe” Christmas lights and eventually started mass producing the brightly colored bulbs through a company called NOMA electric company. Soon enough, cities found themselves taking on the added glow of Christmas displays from coast to coast.

This year in New York, the Christmas lights began appearing as early as Halloween. There was barely time to enjoy Thanksgiving when what would appear but strands of giant green garland across Eighth Street and white stars in the Financial district. Then, at some point, a series of random older Christmas displays were being strung across the streets of the East Village. And, it was in the East Village on 7th Street, near Avenue A, that one display brought back memories of living in a small town in Alabama, when the annual appearance of Christmas decorations in Wilsonville made a small boy thrilled that the season had arrived.

It was in this small town of less than one thousand, usually the day after Thanksgiving, that the boy would ride his bike down to the road, and watch and eagerly wait as men installed the lights, some shaped like canes with bells, others with Santa Clauses faces, others with candles. Hanging from power poles that were normally dark except for an occasional passing car, now were lit with greens, reds and pink. The displays weren’t that polished, instead they twinkled in the wind, almost mystical in nature, to a child, the perfect visual pill of warmth, comfort and hope that Christmas, back then, meant to him. And suddenly, here in New York, amid the hectic brightness of the nation’s largest city, he found that memory in a vintage Christmas display hanging across the street in his busy East Village neighborhood.

There it was, garland lit by lit by pinkish bells hanging in poetic curves that came to point in the middle, framed by a red ribbon. What imperfection, what history, who could say how many Christmases this display had seen? How much had New York changed? How much had the world? One wonders where it’s stored throughout the year. All the New Yorker knew was that he had to pause, to stare, to wonder at its beauty, and its sense of comfort and the fact that it was, unlike so many of the other beautiful displays, a simple key to what the season truly meant. That beauty and hope is everywhere, perhaps even locked inside a memory that only an old Christmas light could set free.
Posted by Cody Lyon-Reporter New York City at 7:04 PM 1 comment: 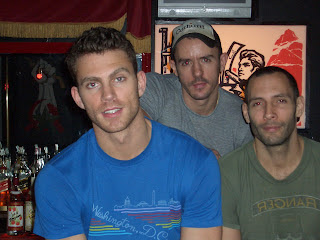 The streets of New York’s East Village appear unusually quiet as those on the out, quickly return in, on this, the city’s first truly bone chilling Saturday night. Even the usual clusters of smokers who’ve been seen braving colder nights than this, appear smaller in numbers and more inconvenienced than usual.

But on Sixth Street, just beyond Avenue A, a cacophony of animated sounds escapes through a non descript red cinderblock wall to the cold sidewalk outside luring passersby with what sounds like warm and fun allure. Behind this iron curtain, lies the Eastern Bloc, a fun den of drinks and laughter, what could pass as the urban equivalent of a red-lit gay American roadhouse.

From wall to wall, heads sway to rhythm while others talk or stare as a muscled, tattooed go go dancer swirls around a bronze poll, surrounded by portraits of Soviet style art. Alongside Stalin, there’s a wild boar, over the bar a zebra’s head is crowned with a red star decorated military officer’s hat while in the back of the long, narrow space, sits a stuffed chicken, all part of the bar’s eclectic taxidermy and pulp fiction motif. Television screens flicker with obscure Japanese animation and vintage erotica as laughter, random shouts and catchy tunes from Beyonce to Zeppelin punctuate random conversations and flirtation.

On December 14th, Eastern Bloc Bar marks one year in business. The venture was built, and is owned and operated, by three first time entrepreneurs who learned the nightlife business where it teaches it’s best lessons, behind the bar.

“Excuse me” a man with a low riding red hat shouts with slow elongated vowels to the bartender working his way through customers, at least three thick.

Behind the bar, two of three owners, both shirtless and bulging with muscle, mix, fill and charge money for drinks ordered by the rambunctious Saturday night crowd.

“On the rocks” the man with the red hat says as the bartender raises a hand to his ear and shakes his head, “On the rocks!” he repeats more loudly as a barman’s tease earns them both some chuckles.

The third owner, also shirtless and the tallest of the three, spins music next to the chicken in the elevated DJ space at the rear of the room, keeping an eye on the crowd, as a cocktail of sound, booze and cruise keeps the night’s clientele crowing.

New York City’s Eastern Bloc Bar, is a creation of Benjamin Maisani of Paris, Darren Dryden of Portland Oregon and Gabriel Beaton from Portland Maine. Arriving in New York at separate moments, the three came together as co-workers while bartending at the Barracuda bar, a wildly successful space in Chelsea. After great soul searching and personal financial assessment they decided to strike out on their own.

The three pooled resources and secured the former Wonder Bar space on Sixth Street, then, all pretty much on their own, began the long arduous days and nights of general carpentry, painting and design of their new bar.

“The bar was in shambles” said Sixth Street resident, current New York City Public School teacher as well as Eastern Bloc’s moonlighting weekend coat check attendent, John Grauwiler. He said the restoration and design was no small challenge for the do it yourself contractors, and their carpentry savvy friends.

But even greater challenges lay ahead.

For one, competition and how to keep the bar filled with patrons. The three’s labor of love would be joining about 60 other Manhattan bars that cater primarily to the LGBT community according to figures compiled from the available listings of a local gay nightlife magazine. And the East Village is home to one of the city’s higher concentrations of gay bars.

But, the three welcomed healthy competition.

Ultimately, the biggest challenge facing the three owners was a name, and subsequently the bar’s unique concept.

“That was the biggest struggle so far” said co owner Gabriel Beaton, known as Gabe, while accepting deliveries and recalling their business adventure with the other two owners a few days before the cold Saturday night.

“We originally wanted to call it Revolver” he said as the three got laughed about a name already taken by a bar in LA no less.

“It’s in the East Village, and it’s an old Polish and Russian neighborhood, it wasn’t silly or obnoxious, it just kept coming back to us” said Darren Dryden, the Oregonian.

And, there’s no denying the historical irony and unspoken sense of triumph over the oppression and drabness that much of the Eastern Bloc once represented. In fact, from 1934 to 1986, the Soviet Union criminalized homosexuality, considering it to be a product of western decadence, landing thousands of gays in gulags.

Inside this 2006 New York City version of the Eastern Bloc, a little decadence was acceptable, perhaps encouraged.

“We want people to have fun” and that’s why “we play music that’s fun, that the crowd likes” said Dryden who often swaps out DJ duties with Beaton.

“People come here and they do have fun” chirps in Maisani in a still distinct French accent.

Maisani and the other two bartenders appear not only business wise, but strikingly smart. For example, each discusses politics, art and history with confidence and ease, obviously armed with knowledge, facts and insight. Maisani, who’s first language is French, received highest academic honors when he graduated New York’s Hunter College in 1999 where he majored in art history.

“I fell into bars totally by chance” he said.

“I was working 9-5 at a museum and then discovered I liked these (bar) hours and the freedom it afforded me” said Maisani who noted that the most popular liquor in the bar, like Russia, is Vodka.

So, besides selling booze and making money, what’s the measure of a successful bar for these three bartenders slash owners?

“Sometimes, people come here and they leave with fun, hopefully interesting, stories” noted Gabe Beaton, the youngest of the trio.

And apparently, it is fun they are having on any given night inside the Eastern Bloc Bar, an interesting place that is the antithesis of drab or oppressed. So far, the young new funky nightspot is not only earning and maintaining a solid regular clientele, they’ve succeeded in becoming a spot on the East Village drinking trail, a cherished position in an area saturated by nightlife.

So, on a cold Saturday night as temperatures plunged and the wind blew, the iron curtain that descended over the East Village just over a year ago, kept revelers warm inside its triumphant, decadent and party filled borders. Rest assured, some really interesting stories would be told later that week.
Posted by Cody Lyon-Reporter New York City at 10:33 AM 3 comments: