From 9/30/07 "New York Times" Op Ed-Columnist Thomas Friedman.
I honor and weep for those murdered on 9/11. But our reaction to 9/11 has knocked America completely out of balance, and it’s time to get things right again...9/11 has made us stupid.
Link to full text at NYT
Posted by Cody Lyon-Reporter New York City at 11:59 AM No comments:

C Lyon article from January 2006 edition of "Our Town" "West Side Spirit" detailing specifics as well as the ongoing debate over a proposed Congestion Pricing-Traffic Reduction scheme for Manhattan. FULL TEXT LINK
Posted by Cody Lyon-Reporter New York City at 10:17 AM No comments:

by Colin Moynihan at "New York Times" A commission created to come up with a plan to ease traffic in New York City met for the first time yesterday and began its debate on whether Mayor Michael R. Bloomberg’s proposal to charge motorists who drive into the busiest parts of Manhattan is the best way to proceed. Link to full TEXT
Posted by Cody Lyon-Reporter New York City at 10:10 AM No comments:

AP Story via "New York Times" These troops are just starting to seek help in large numbers, more than 185,000 so far. But the cost of their benefits is already testing resources set aside by government and threatening the future of these wounded veterans for decades to come, say economists and veterans' groups. Link to AP Story at "New York Times" .com
Posted by Cody Lyon-Reporter New York City at 3:04 PM No comments:

9:29's "Birmingham News" is reporting that a Federal appeals court has told U.S. District Judge Mark Fuller of Montgomery to promptly rule on former Gov. Don Siegelman's request that he be released from prison while he appeals convictions on bribery and other charges. Link to Reporter David White's story in the "News"
Posted by Cody Lyon-Reporter New York City at 1:29 PM No comments:

Who is the Leader of Iran?

Understanding who Mahmoud Ahmedinijad actually is, his power, his influence and who he speaks for. FROM PBS NEWSHOUR and Judy Woodruff
Posted by Cody Lyon-Reporter New York City at 9:35 PM No comments:

Perhaps one of the most powerful, compelling experiences ever broadcast on television.
Indeed, a prism by which to view our modern world. Link to more information about this documentary.
Posted by Cody Lyon-Reporter New York City at 6:53 PM No comments:

"The New York Times" is now saying that it violated policy by giving a fee discount to liberal advocacy group Moveon.org for its full page advertisement that criticized General David Petraus. "The Washington Post" has reported that a "Times" spokesperson called the ad a mistake. Here is Howard Kurtz's story. LINK TO WASHINGTON POST STORY
Posted by Cody Lyon-Reporter New York City at 10:44 AM No comments: 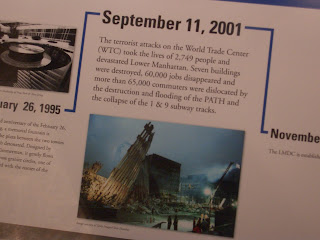 Priorities appear to be out of order in the Senate, at least when it comes to finding common ground on tangible resolutions that impact the nation’s future military involvement in Iraq. The misappropriation of priorities was on full display this past Thursday when the Senate voted 72-35 to pass a resolution condemning the liberal anti-war group Move On.org for its full page advertisement questioning the credibility of General David H. Petraeus in “The New York Times”.

Americans will hopefully ask why the Senate wastes time passing resolutions over advertisements in newspapers when there is a truckload of un-answered questions regarding the circumstances that led to this disastrous mess of a war sitting in the Senate’s parking lot, waiting to be unloaded and asked.

But, this Senate is quickly proving to be a timid bunch, well intentioned we’re sure, but if reported voter sentiment is correct, pretty ineffective on matters dealing with . To be sure, one need only take into account a failed measure to bring troops home within nine months or a failed measure that would have provided equal amounts of time at home to the time spent deployed on the ground in Iraq as evidence that a forging of brave new policy is still only a sentiment expressed by citizens, pundits, bloggers and editorial writers.

Once again Americans are left to ask where, when and if we will see demands for answers about how the burning questions over how this war is and has been being prosecuted, answers that go beyond the spoon feeding the Senate has received and accepted as truth from this White House and its military representatives?

What appears to be happening, is a misdirection of attention and a lack of focus on reality,instead, we get the hauling out of an old political number that the ethically challenged Bush administration loves to play on its piano of platitudes, a questioning of patriotism, an immature game of political hard ball that members of the Senate apparently enjoy, and rather than call a time out, and begin the difficult task of making changes in policy and planning, they play right along, blinded by a stream of shallow and simplistic certitude they apparently believe shows them to at least appear patriotic.

It looks like President Bush still has the ability to make members of the Senate jump with fear by bringing further attention to and demanding in not so subtle language, that democrats condemn a controversial advertisement, a resolute official condemnation of nothing more than one political activist group’s paid punditry in a newspaper. The result of the President's tactics and the spirit of weakness in the Senate is a useless and spooky resolution that in the end condemns one of the most sacred fundaments of our system, free speech.

Closer again to reality are more questions that ask whether or not the Senate understands that by passing such a petty and silly resolution, it stands to provide Moveon.org with greater political elevation and status, even in the eyes of those who oppose its message? And an even more disturbing question, does the Senate not recognize that its latest move fuels the perceived power of this White House and its continued abuse of the concept of patriotism? Does the majority of the Senate still not understand that this White House is home to an administration that when push comes to shove, will shamelessly capitalize on the sad and nasty political divisiveness that is the reality of today?

What better place to look for political disasters than the halls of Congress, a place where truth and principal often lose to Republican and Democratic political grandstanding thanks to the knocking knees of political terror, brought on in part by a quip from the President, who’d said Democrats must be afraid of offending Moveon.org, which is why they (Democrats) failed to condemn the ad. What better place to look than these hallowed halls than to see a miscarriage of patriotism when this government body can’t even agree to give our fighting men and women as much time at home as they spend deployed, fighting in a war that has cost us over 4 thousand brave souls, countless injured and emotionally scarred and God only knows how many dead and displaced Iraqis’ in an increasingly un stable region where we are now the appointed guardians.

Has the Senate yet again, failed to realize the truth and chosen to hide behind its blindness to the definition of what it means to be patriotic?

Civil Rights leader Malcom X once said, “you’re not supposed to be so blind with patriotism that you can’t face reality; wrong is wrong no matter who say’s it.

Posted by Cody Lyon-Reporter New York City at 9:53 AM 1 comment:

The Foundation of a Scandal (from Alabama's Legal Schnauzer blog)

Roger Schuler's "Legal Schnauzer" blog in Alabama is providing insightful and sharp perspectives on emerging questions regarding the Department of Justice role in the Don Siegelman prosecution and conviction. Here's a link

"The Anniston (Ala.,) Star" Blasts the DOJ over Siegelman Documents

FROM THE ANNISTON STAR-9.12.07-Something smells bad here. It smells bad even when one discounts the shenanigans involving the firings of U.S. attorneys across the nation and the hiring of DOJ personnel based on their ideological beliefs.

It smells even worse when one considers that a man may sit in prison today because his political enemies may have arranged his prosecution for political reasons. LINK TO FULL TEXT

Posted by Cody Lyon-Reporter New York City at 10:04 AM No comments:

"The New York Times" is reporting that A carefully constructed compromise on a draft law governing Iraq’s rich oil fields, agreed to in February after months of arduous talks among Iraqi political groups, appears to have collapsed. LINK TO STORY
Posted by Cody Lyon-Reporter New York City at 9:53 AM No comments:

Dots Are being Connected Regarding Matters/Individuals in Siegelman Case...

Scott Horton at Harpers ( 9.14.2007) look at the original prosecutor of Siegelman, US Attorney Leura Canary who says she recused herself because of the appearance of a conflict of interest. As Horton says,Mrs. Canary is in the crosshairs of the emerging investigation of the Siegelman case. Leaura Canary is the wife of William Canary, referred to by some as a legend in Republican circles an Alabama kingpin. According to Horton's reporting, in 1995, Mr. Canary and Karl Rove put together a strategy that would put G.O.P handpicked candidates in key appellate court races.....Fast forward to the ongoing investigation where Mrs. Canary says she recused herself from the Siegelman case after questions arose over impartiality in part due to her connections to powerful Republican operatives like Rove. For Horton's perspective to date click here for HARPERS.


Scott Horton at HARPER'S takes an in depth look at the "perjury matter" involving Alabama's Northern District (Republican) US District Attorney Alice Martin and its connection to the Siegelman prosecution.
From the 9.8.2007- HARPER'S: What was going on that caused OPR to deep-six the Martin perjury matter? Go back and check your calendar. This was one month before the commencement of the trial of Governor Siegelman. So maybe Justice was anxious not to do anything that would shake the boat of the Siegelman prosecution or more specifically rattle confidence in the federal prosecutors behind it. LINK TO FULL TEXT
Posted by Cody Lyon-Reporter New York City at 10:39 AM No comments:

From the 9.11.2007 "New York Times" story by Adam Nossiter: House leaders are beginning an investigation this week of the prosecution of Don Siegelman, the former Democratic governor of Alabama who was imprisoned in June on federal corruption charges. The case could become the centerpiece of a Democratic effort to show that the Justice Department engaged in political prosecutions.
Link to full text "New York Times" story
Posted by Cody Lyon-Reporter New York City at 10:29 AM 1 comment:

Redefining Goals in Iraq (from The New York Times)

...no one will be talking about achieving victory, just stability...from reporter David Sanger's analysis report in the September 10 edition of The New York Times. (STORY LINK)
Posted by Cody Lyon-Reporter New York City at 1:14 AM No comments:

How Many Illegal Wiretapping Programs Does Bush Have?

A Clip from PBS FRONTLINE

A local couple is complaining that U.S. Rep. Doug Lamborn left them two threatening voice mails after they wrote a letter criticizing his fundraising.

Jonathan Bartha and Anna Bartha told The Denver Post that Lamborn said there would be "consequences" if they did not withdraw their letter. LINK TO CBSNEWS/AP Story
Posted by Cody Lyon-Reporter New York City at 9:25 AM No comments: