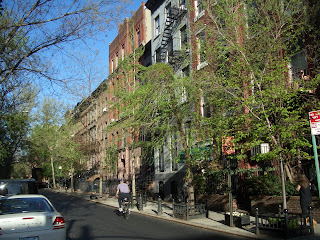 Just a simple picture of a West Village Street in the Summertime.
Posted by Cody Lyon-Reporter New York City at 10:28 AM No comments:

An intriguing story about transnational companies and a country torn by civil war written by Kyle Whitmore.
From "Birmingham Weekly"
Posted by Cody Lyon-Reporter New York City at 9:12 PM No comments:

The United States House of Representatives approved a resolution that would prohibit the establishment of permanent US Military Bases in Iraq. Here's a link to coverage of this important vote as reported by Dan Robinson of "Voice of America".
Posted by Cody Lyon-Reporter New York City at 5:21 PM No comments:

The Power of Art

by the artist Joseph Mallord William Turner: The Greatest British Picture of the Nineteenth Century: From Simon Schama's Power of Art;
Link to PBS.ORG

The horrific story behind the Slave Ship painting from BBC UK.
LINK
Posted by Cody Lyon-Reporter New York City at 7:48 PM No comments:

Link to my story at EDGE PUBLICATIONS
In spite of any laws on the books, the transgender individual, the feminine man, the butch lesbian or anyone who expresses gender identity and subsequent appearance that runs counter to what society sees as normal can find the most common act of a human being--using a facility to relieve oneself--a humiliating experience. And public restrooms can present the most difficult challenges that can lead to perilous situations and even arrest.

It is in this most mundane of spaces--a place where individuals relieve themselves, wash their hands and muss with their hair--where unwritten, unspoken social mores and traditional views of gender are challenged
www.edgenewyork.com

Posted by Cody Lyon-Reporter New York City at 9:20 AM No comments:

Revival of a Gold Standard ?

In 1968, upon returning from reporting on the ground in war ravaged Vietnam, CBS News Anchorman Walter Cronkite assessed and editorialized before millions of viewers about what he had seen and discovered. He cited mounting evidence that reinforced the perception that America's involvement in Vietnam was turning increasingly tragic and that the victory we originally sought may not be possible. His ending paragraph in an evening newscast almost 40 years ago, feels all to applicable today. The last paragraph of Cronkite's words were as follows:
To say that we are closer to victory today is to believe, in the face of the evidence, the optimists who have been wrong in the past. To suggest we are on the edge of defeat is to yield to unreasonable pessimism. To say that we are mired in stalemate seems the only realistic, yet unsatisfactory, conclusion. On the off chance that military and political analysts are right, in the next few months we must test the enemy's intentions, in case this is indeed his last big gasp before negotiations. But it is increasingly clear to this reporter that the only rational way out then will be to negotiate, not as victors, but as an honorable people who lived up to their pledge to defend democracy, and did the best they could.

Below is a link to Shieffer's commentary about the the Iraqi Parliament taking a long recess over the month of August, all the while American troops continue to die. It is powerful, honest and served up with a dose of truth, much like Cronkite's frank assessment in 1968. (The issue of heat,the Parliament's vacation, while American soldiers suffer in the same heat, was first questioned by ABC News Reporter Martha Radditz who was quick to point out our troops fate to White House Press Secretary Tony Snow. The questions from Radditz came after Snow defended the Iraqi parliament's August vacation at a White House Press Conference, which he said was due to the fact that it is hot (130 degrees) in Iraq in August.)

Schieffers commentary, short but stinging and powerful, is refreshing to hear from this veteran of journalism, especially when compared to what some see as a long period of timidity, and gussied up broadcast and cable news programs. And, Couric's brief commentary/question from her "notebook" regarding the President and the law (found in the second link) sends a velvet dagger through the heart of what increasingly looks to be an ethically challenged White House. One can only hope that the powers that be at CBS News, continue to allow, perhaps encourage such critical commentary, analysis and reporting. There is power in the press beyond just the facts and hopefully more television news outlets will accept greater responsibility and embrace that truth fulfilling its necessary role as a guardian of democracy.
Shieffer's Commentary from CBS NEWS-FACE THE NATION

Above the law? From CBS NEWS

Brother, Sister, Do You Know Who You Are?

I love black people, my people, but some of us are lost. It's as if we are sleepwalking, traveling through life without a compass. And I am convinced it is because we don't know who we are.

Don't get me wrong; I don't think I am any better than the people I saw that day. And they, by no means, represent all black people. They are, however, a segment of our community that deserves our attention and care because they are sick, suffering from spiritual amnesia and totally clueless about the greatness that lies within them. From the linked essay by Sutton

From "B, ham Weekly"- On Former Alabama Governor Don Siegelman

Below, find the link to an insightful but sad look at a former Alabama political star who allegedly went 'bad'. At the end of the day, the disappointed people of Alabama have to watch a former Governor they had originally elected to enact positive change, go to jail.

Perhaps, this is just an example, albeit Southern style, of a system steeped in back slappin, bourbon soaked political wheeling and dealing as well as the explicit pedaling and purchasing of Government influence. In this case from the Heart of Dixie, exposed for all to see. The final verdict, opportunistic and corrupt, and a slap in the face of those who believed in a man's initial message.
Go to the link below for"Birmingham Weekly" reporter Kyle Whitmore's column "War on Dumb"