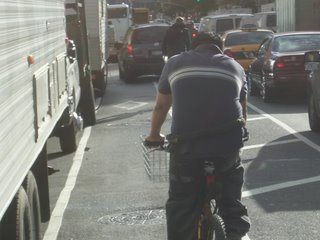 
New York City, unlike most American urban areas, offers numerous transportation alternatives beyond the private automobile. Walking is wonderful and the extensive 24-hour mass transit system is certainly quick and convenient. But nothing is more exhilarating, efficient and enjoyable than getting on a bicycle zipping through the crowded streets of New York City, provided the rider does not mind assuming the role of transit pioneer and cycling soldier.

New York City has made great attempts to accommodate cycling commuters and recreational riders on its streets. The city maintains about 400 miles of bike paths and greenways. The March 2006 issue of Â“Bicycling MagazineÂ” said New York City is the third best cycling city in the United States. The cityÂ’s Department of Planning printed and distributed over 200 thousand copies of its map of city greenways and recommended street routes this year. One of the goals of the map is to Â“recognize bikes as a legitimate mode of transportationÂ” according to the Department of Planning.

But, truth be told, there is a daily battle occurring on the streets of New York City between automobiles and bicycles. Automobiles, whose weight is measured in tons and speeds capable of triple digits, maintain the clear safety advantage over the pedaling human eggshells called cyclists. Cyclists glide through streets on two wheels all the while dodging arrogant SUVÂ’s, cumbersome bullying busses and manic trucks on deadlines making deliveries to homes and businesses across the five boroughs. Yellow Cabs race for fare paying customers, phantom looking black sedans zip through lanes ignoring all around them and lost or intoxicated commuters attempt to pass, cut in front of or compete for parking in the chaotic, poorly policed traffic choked streets of New York City.

In addition to the unpredictable cars, cyclists must be on the lookout for the thousands of Carries and Bills, who while frantically discussing the eveningÂ’s plans or an earlier lunchtime meeting on their cell phone, tend to jaywalk, wonder aimlessly into a crosswalk or bike lane, disregarding traffic signals or worse yet, completely ignoring the moving human on the bike headed right for them. Perhaps theyÂ’re on the phone chatting with the countless car drivers who forgot that there is a law that Â“prohibitsÂ” cell phone use while driving. And then, there is the inconsiderate cab passenger who insists on not looking back for the approaching bike, instead hurling the car door open, bags in tow, as if he or she meant scare the stranger on the bike. Of course this careless but common New York move has the ability to send a cyclist flying head first directly into a serious head or back injury or even death. And, Lord knows, riding a bike at night in New York is a crapshoot all its own. While cyclists are slightly safer with a headlight, there is no protection from the masculine challenged hot rod types who seek to impress passengers and pedestrians on the sidewalk with high-speed antics, burnt rubber and deafening music that ignores any sense of the ongoing crowded reality of life carrying on around them. And, thereÂ’s no ignoring Little Lucy Hummer girl, who drives with blinds through the streets of Soho , feeling safe in her tank, but wreaking havoc on the young woman with flowers in the basket of her bike, as she tries to make it home for dinner.

It is true that some pedal power types are less than angelic, sometimes brazen. Some bikers embody what it means to be a menace. Nothing is more infuriating than an errant biker, running against the signal through traffic lights, those who go the incorrect direction on one way streets, those who terrorize elderly folks by jumping up on the sidewalks and displaying what appears the cyclistÂ’s version of inconsiderate dangerous transportation arrogance. Often this behavior is remedied by a good New York tongue -lashing. But in reality, the menace that bikes present to pedestrians pales in comparison to the real dangers that cyclists face on city streets.

Cyclists are in a psychological, political and legal battle for acceptance of biking as a legitimate mode of transit in New York City. The battle has led to competing visions of what urban life in the Big Apple and other cities can and should be. It is still risky to pedal to a destination in the city.

New YorkÂ’s Transportation Alternatives, a non profit organization that advocates for safer walking, bicycling and sensible transportation, notes that New York has the highest number of pedestrian and cycling deaths in the U.S. The majority of all traffic fatalities in New York City are cyclist and pedestrian deaths. Cyclists were 12 times more likely than car occupants to get killed than car occupants in traffic accidents according to a study by Professor John Pucher PhD and Lewis Dijkstra PhD that was published in the Â“American Journal of Public HealthÂ” in 2003. That same study noted that per km per trip cycled, American bicyclists are twice as likely to get killed as German cyclists and over three times as likely to get killed as Dutch cyclists.

Dutch envy is in order when one considers that from 1978 to 1996, Holland more than doubled its already extensive network of bike paths. In addition, there are increasing numbers of Â“bike streetsÂ” in both Holland and Germany. On those streets, cars are Â“permittedÂ” but cyclists have the right of
way over the entire breadth of the roadway. One wonders what the results of such an urban refuge on Broadway, Fifth Avenue or any busy street in an American city would be. The results might show up in lower obesity rates and slightly decreased levels of car exhaust. Maybe too, American cities, like New York, would find that individuals who ride a bike to get around, are in better spirits thanks to the raised levels of endorphins that exercise like cycling has been proven to increase.

New YorkÂ’s Transportation AlternativeÂ’s roots are in bicycling. The organization, with its extensive cache of cycling data, attributes a great deal of the dangers that pedestrians and cyclists face to automobile driverÂ’s Â“widespread speeding and a general disrespect for cyclists and pedestrians. In spite of increasing environmental concerns, gas prices and the general frustration of commuting by automobile, we continue to invest heavily in the endless cycle of road infrastructure and highway expansion. Plain and simple, the car is still king on the streets of America.

Despite the carÂ’s dominance, an estimated 120 thousand New Yorkers put their legs, lungs and hearts through an exhilarating but often nerve racking work out by hopping on bikes, pedaling from Point AÂ’s to BÂ’s throughout the busy Big Apple streets each day. In spite of real dangers, it is still the fastest way to get around the city. Riding through the streets of New York offers amazing views, smells and sounds real connections to the souls of each passing block and neighborhood, experiences that the protected bubble of an automobile denies. But, bikers must share the road with the up to one million automobiles that enter the crowded streets each day as well. In spite of the formidable overwhelmingly vast army of gas guzzling, road hogging sometimes erratically driven horn honking machines, the bikers pedal on.

This year, the city promised that it was going to move forward with the addition of 200 miles in new bike lanes. Hopefully, in the future, these bike lanes will be more than marks on the road that some cars tend to ignore. Bike lanes in New York are usually sandwiched between parked cars on one side and moving cars on the other. They are certainly not the most ideal solution, but they are better than nothing at all.

Cycling advocates should continue the fight for safer biking conditions and greater road space in New York and other cities. Those on the frontlines of the battle, the cyclists themselves, should try to ride safely by the rules while encouraging friends to join them for a recreational ride or a trip to another neighborhood for dinner or a movie. Businesses and other institutions would be well served to provide facilities for changing and showering so that employees can cycle to work. Cyclists should remember what the automobile figured out years ago when they took over the roads and seized power in government, that there is power in numbers.
Posted by Cody Lyon-Reporter New York City at 4:47 PM

Hi,
I found your blog via google by accident and have to admit that youve a really interesting blog :-)
Just saved your feed in my reader, have a nice day :)