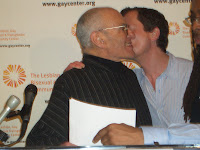 During a rousing March 13th sermon marking 20 years of the group he founded, ACT UP, 71 year old author and gay rights leader Larry Kramer argued that the current crop of Presidential candidates did not deserve gay votes. Kramer said they, the candidates, would all “sell us down the river given half a chance.”

Singling out Democrat Hillary Clinton, the candidate he predicts to win, Kramer said “the woman does not even know how to make simple declarative statements that involve definite details.”

Kramer couldn’t have planned the next day’s news cycle better himself. An answer Senator Clinton gave ABC News in response to a question about gay people suggested that Larry Kramer owns a mystical political crystal ball.

was asked whether or not homosexuality was immoral, to which she said “I’ll leave that to others to conclude.”

Showing traits of a real politician, the Senator did avoid declaratives and instead demurred, obviously hoping to avoid controversy from certain constituencies in ’s vast voting block. A few days later, after a great deal of uproar from some of her own core constituents, did step up and made it clear, that she does not think homosexuality is immoral.

In the first place, probably wouldn’t have been posed such a heavy handed question had it not been for highly publicized comments by the nation’s top military commander. When asked about gay’s openly serving in the military Joint Chief of Staff Marine General Peter Pace told the “Chicago Tribune” on the Monday before Kramer’s speech that the “United States is not well served by a policy that says it is okay to be immoral in any way.” After Pace went on, likening homosexuality to adultery, he attributed his views in part to his personal upbringing where he said he was taught certain kinds of behavior were indeed, immoral.

Because of his position, General Pace’s comments trickle down into the courts of public opinion on gay people. To some, General Pace’s words further legitimize negative views towards homosexuality. Politically engaged, self serving Right Wing groups can point to his assertions as evidence that morality justifies policy, even if that policy clearly includes discrimination. Pace shares a background similar to that of millions of other Americans. But, his words have the potential to give pause to millions of socially moderate Americans struggling to overcome and move beyond clearly narrow interpretations of morality that lead to prejudices, stereotypes and ultimately the condemnation of entire groups of people’s ways of life.

To delve into the roots and definitions of morality would take hours, but there is no doubt, that over time, American’s views on what is moral and immoral has evolved. Many of these evolutions have resulted in elimination of policy and socially acceptable practices that enslaved, denied, separated and even paid less for the same labor, all which at one time or another, was justified by codes of conduct rooted in society’s interpretation of morality.

But there are countless examples where, with the help of strong and un-compromised leadership, oppressed people have stood up, and in the end, enlightened and affected the American moral compass in ways that have led to numerous examples of a more just and fair society.

That is why it was so disappointing that Hillary didn’t just say “no” the first time when asked whether or not she found homosexuality immoral.

Activist Larry Kramer is right about Senator Hillary Clinton’s chance at becoming the first woman President of the . Not to long ago, the idea of a woman President, believe it or not, may have been seen as immoral to some. American society subjected African Americans to second class citizenship and justified the slavery of human beings through narrow self serving interpretations of morality. Obviously, interpretations of what is moral have evolved and with that, society and its rules of conduct have changed. But those changes have involved difficult collective self examination and constant struggles to arrive at consensus. It has taken strong and brave leadership to make any headway to the more just and fair society of today, a fundament of true moral values.

One hopes that Larry Kramer is wrong about all the candidates selling gays down the river for political gain, and that in these days of competing interests and attempts at avoiding political minefields, reason and enlightenment, with the help of strong resolute leaders can help steer the nation to a more just society, for all people, including those who happen to be gay.

Although many on the Right point to interpretations of biblical based codes of morality as justification for much of Evagelical America's anti-gay sentiment, there is a passage in the bible that appears to rise above those condemnations and specific restrictions on behaviors deemed wrong by man. It is said to be a golden rule and it instructs God's children to “do unto others, as you would do unto yourself.”

Posted by Cody Lyon-Reporter New York City at 11:49 AM