Notes On A Thursday in Spring 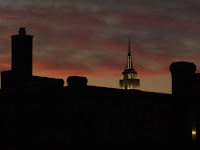 The weather goes from cool to warm and the sun is bright this particular Thursday in ’s . At a Mexican takeout shop, beef tacos are purchased, then eaten sitting on a bench in , under a tree that appears very lush, and filled with chirping birds.

The park is crowded, the playground full of kids, the grass covered with sun bathers, the dog run is noisy, chaotic.

At the dog run, people gather, watching the dogs, apparently a fight has broken out, first between dogs then it spreads among humans. One man pushes another, barks and shouts are traded, as all the dog owners yell at an older man, because of what they say is an aggressive dog.

But the cell phone rings, it’s a friend in , she says hello and the conversation lasts for a while.

She’s been dating a new guy, she thinks she really likes him and he’s taking her on a trip to .

Near the end, she asks the price of gas and says that it's over $3 a gallon down there. Fortunately, she drives a compact car.

Meanwhile, the older man in the dog run is not leaving, voices are even louder, the others appear mad, they keep shouting at him to leave, the dogs keep barking.

The phone rings again, it’s another really good friend, it goes to voicemail.

“Hey, I’ve had a problem and I need some advice” the message he left said.

Later, after doing some work, a bike ride is taken across the village on to the Westside. The bike crosses Square Park’s arch is to the south, the sidewalks still crowded even for , couples holding hands, more men with dogs, shopping bags are everywhere, summer fashions are here.

The bike makes it to Christopher Street the river is in sight, headed towards the pier, there’s music everywhere, smiles cross many faces, but up ahead there is congestion.

Two women in a car are blocking traffic, apparently one took another home, the street is narrow, they’re in an SUV, cars begin backing up, horns are being honked. Finally one of the women gets out, she’s young, very pretty and she appears oblivious to the anger behind her.

In one of the cars behind the two’s, a man who is driving and listening to disco music hollers at her, she doesn’t appear to hear it.

“I’d like to go home too b*tch ” he screams in a slightly southern accent, while she climbs onto the sidewalk with her IPOD head-phones on.

Once the biker makes it to the river, the sun is gone and the sky is filled with pinks, orange and streaks of red. The river glistens, almost metallic, as the rays of light glimmer from the west that is , the mainland.

To the south, is ’s financial district, the skyline still misses it towers but a new one has filled in at least part of the gap.

A man walks by, he smiles, a smile is returned, here appears the peace and that moment of reflection only sharable by writing it down.

A couple walks by, they are laughing, holding hands, one of them just told a story about his Mother and the fact that her voice cracks when she's angry.

A large number of joggers are out, all shapes, all sizes, some run fast, as if they're catching up on training for a marathon. They compete with bikers for space. Sometimes, the shoot each other nasty looks.

In the grass, two women on a blanket appear to have brought in some wine, they better be careful, the park police will give them a ticket.

The view to the south offers harbor, the statue of but then, the geographic direction of comes to mind.

The night before, PBS “Newshour” was watched, part of a report was aired, it was called “The Costs of War in ” and was reported by Economics correspondent Paul Solman. That report gave pause to this beautiful and busy day in New York City that was now saying goodbye.

The “Newshour” report showed Huen as he struggled to get up out of a chair, obviously in great pain. It also offered a photograph of Heun, at an earlier date, a well built, athletic looking young man, who’d probably have fit in with the fit and fast joggers this day in .

Heun’s vertebrae was crushed in a 2003 truck accident in .

He now has fused discs, a steel bar in his back and constant excruciating pain in his hip and leg according to Solman’s report.

“Literally, it feels as if somebody just took a baseball bat and blindsided you across your back” Heun told the “Newshour”.

In the report, viewers learn that the army discharged him with only 20 percent disability, which means no benefits. Heun does get medical care from the VA plus $2,500 a month to support a family of five, but no insurance for his wife or children. He’s trying to afford a COBRA policy, but that is too expensive. His 2 year old daughter now needs surgery, but the family has had to put it off, because they simply can not afford it.

Heuen’s wife Beverly tells correspondent Solman, that they don’t want to do the daughter’s surgery at the expense of her not having a home to live in.

“I think it’s a disgrace to this country for me to even be sitting here trying to tell you this” she told “Newshour”.

“At its worst, I have been on an emergency room gurney, curled up, and not even be able to concentrate on simple questions” he told “Newshour”.

Concentrating on simple questions, during a sunset along the in overcame earlier observations of urban life. Questions about the fate of the around 25 thousand seriously injured military members coming home from Iraq begin to puncture the relative calm of an evening by the river. How many limbs have been lost, how many bones crushed, how many skulls shattered, how many bills not paid, how many minds damaged? Why?

Suddenly, some questions appeared to have answers.

Memorial Day was just a few days away.

Thank you for the thought not just of me but of all Soldiers who have sacrificed for this Country. I spent 1 1/2 years in surgery, recovery, and rehabilitation. That time was spent with hundreds of other Soldiers, many worse than me. We had to start fighting for a new life at that time different than anything we were used to. The Newshour barely scratched the surface of what happens to Soldiers when they become "of no use" to the military anymore. Thank you again for the thought and more importantly remembering all Soldiers and the new battles we return to.
Brad Heun

Cody,
Thank you for finding a way to weave a tapestry of our currently American external reality (war and injustice experienced by soldiers who are/have fighting/fought in the Iraq war) with the commonplace conception and action of recognizing Memorial Day as nothing more than a 3day weekend here in NYC. My support goes out to all soldiers, their efforts and challenges faced as a result of the conflict in Iraq. I am disgusted by The Newshour sharings and even moreso by the struggles soldiers like Brad Heun are left to endure.

Cody, your simple observations of the mircocosmos of Manhattan floating along on the stream of ideals, hope, and sacrifice of our brethen is breath taking.

Thank you for sharing Brad Heun's story with a raw blind truth.

A friend forwarded this on to me. Thanks for posting -- you really captured some of the tragedy of war.

Thank you for bringing your compassion, and doing your part to bring awareness to an issue, and the true meaning of a day, Memorial Day, that has escaped the consciousness of so many for so long. The deplorable tragedy, and the “reasoning” behind it, that has become Brad Huen’s life, his family’s life, and the life’s of thousands more is unforgivable, but should never remove the honor he, and men and women like him have earned and deserve.

Thanks for this Memorial Day reminder. I read this on Talking Points Memo and commented there, too.

We need these reminders that our ordinary lives go on while those who choose to take on the job of protecting our nation without thought to a moment of glory.

This is real and it's now. I'm waiting for the day when we prioritize protecting the protectors.